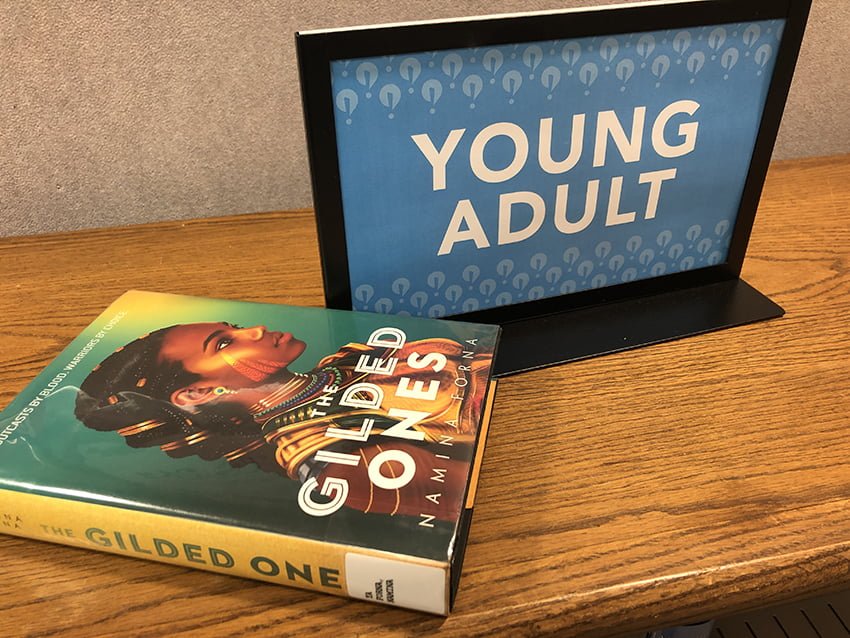 Every year, there are hundreds of thousands of new books published. But I want to just highlight my four favorites published in 2021 that can be found downstairs in the Young Adult (YA) section, as well as four books scheduled to be published in the first half of this year that I am very excited to see added to the YA collection.

In 2019, Hafsah Faizal introduced the world to Zafira and Nasir in “We Hunt the Flame” with these words, “People lived because she killed. People died because he lived.” “We Free the Stars” was published in mid-January 2021. In it, she brought us back to the land Arawiya, and Zafira and Nasir’s story in the final installment in the Sands of Arawiya duology with these words, “Darkness surged in his veins. Power bled from her bones.”

Reading Faizal’s work is reading a masterly crafted work of art. Her skill at character development and world building is indisputable. And from beginning to end she carefully weaves a tapestry in a way that readers only see the full picture when she has decided she wants to reveal something.

For anyone who loves fantasy and adventure, this is a must read.

In April 2021, Alexandra Overy released “These Feathered Flames,” her retelling of the Russian folktale, “The Firebird.” (One version of this Russian folktale can be found in “Koshka’s Tales: Stories from Russia.”) Be warned though, this is marked as book 1. However, should you pick this book up, know that book 2 (“This Cursed Crown”) is scheduled to be published this year! Like with Faizal’s Sands of Arawiya duology, Overy goes back and forth between different points of view. In this case, twin sisters Izaveta and Asya: One destined to be queen and one the Firebird.

There were a few points where I wasn’t able to follow the logic around magic as I understood it to work in Tourin, but they were small things and do not stop this from being one of my favorite books I read in 2021.

If retellings of fairy tales or folklore is your thing, definitely pick this up and get excited for the next book that should be out in December of this year!

At the beginning of October 2021, “The City Beautiful” by Aden Polydoros came out. And wow was this book hard to put down. It is a historical fantasy novel set during the Chicago World’s Fair of 1893. (If you want to know more about this topic, check out Erik Larson’s “Devil in the White City.”) Up until reading this book, most books I’ve read with majority Jewish main characters takes place during the Holocaust — while this does speak in part to the books I have picked up — it also feels like there are many people who would like this niche to be expanded.

While the author does describe the book as being part fantasy, to me it feels more like it has bits of paranormal elements more so than fantasy. It is also part mystery as well! So a little bit of everything for everyone. What I loved most about this book though was the main character Alter. His worldview, determination, and passion are three of the main things that got me invested in him and his story before the end of chapter one.

Whether you like historical fiction, fantasy, paranormal, or mystery, this is a book I can’t recommend enough.

“Aristotle and Dante Discover the Secrets of the Universe” was originally published in 2012. When  I heard that Benjamin Alire Sáenz was writing a sequel, I was skeptical to say the least. However, Sáenz blew me away with “Aristotle and Dante Dive into the Waters of the World,” published mid-October 2021. Even though the book is listed as a romance novel. It is so much more than that. It is about coming into oneself; relationships with family; and creating friendships.

At the end of the book, I found myself not wanting to be without them. However, this is one of the times I hope there isn’t another sequel written, because I don’t think any book could live up to the story and possibilities of Aristotle and Dante as they now live in my heart. This book is full of heaviness, but also hope. Hate, but matched and exceeded by love. It is real and it is true. It is beautiful and something to find wisdom in.

For those who still need to read (or reread) the first book before reading “Aristotle and Dante Dive into the Waters of the World,” come join the inaugural LGBTQ+ Book Group on Feb. 17th at 7 p.m.  to discuss “Aristotle and Dante Discover the Secrets of the Universe.” You can visit the calendar to register until the day before the event.

In early February, “You Truly Assumed” by Laila Sabreen is scheduled to be published. I am only a third of the way through the Advance Reader Copy, but I am hooked. It is proving to be a powerful story. It follows three teenagers (Sabriya – an aspiring ballerina, Zakat – a talented artist, and Farah – a coder) as they deal with the effects on their separate communities in the weeks following a bombing.

If you liked Angie Thomas’ “The Hate U Give,”  then this will be a book you should check out.

I used to assume that books where the central storyline was around a romantic relationship was not something I would enjoy. But then I had dozens of friends recommending Casey McQuiston’s debut novel “Red, White & Royal Blue.” I assumed that because it was a romance book (even before I picked it up) that I would not really like it. But I was so, very wrong. I absolutely adored every page of that book. So, I can barely wait for her debut YA novel, “I Kissed Shara Wheeler,” scheduled to come out in early May.

I was given the opportunity to read the Advanced Reader Copy of Improbable Magic for Cynical Witches by Kate Scelsa as well and am excited for more people to get to read it. Everyone else will need to wait until May to read it. Eleanor is cynical about many things: romance and witchcraft being two of them. The former due to a history she desperately wants to keep secret from Pix. The latter is due in part to working at a gift shop in Salem for a boss who is equally skeptical of witchcraft.

I thought it was great the way Scelsa integrated Tarot cards into the story. Seeing witches and covens portrayed as they were in this novel was unique for literature, but felt realistic at the same time.

If you like contemporary fiction with a dash of romance mixed in, definitely pick this up when it comes in.

In fall 2020, Namina Forna published “The Gilded Ones” and I was fortunate to have been given access to the Advanced Reader Copy. Deka lives in a world where the color of a girl’s blood determines if she is considered pure or rejected from the society they grew up in and considered to be a monster. But so much is not what it appears to be when those girls who were rejected from society because of their gold blood are recruited by the emperor to fight against his enemies.

I was blown away by the world she created and how complexly she developed the different characters. I have no doubt that the sequel “The Merciless Ones,” set to publish in late May to early April this year, will be just as gripping as the first book in the series.

What about you? What books are you excited to see published this year?