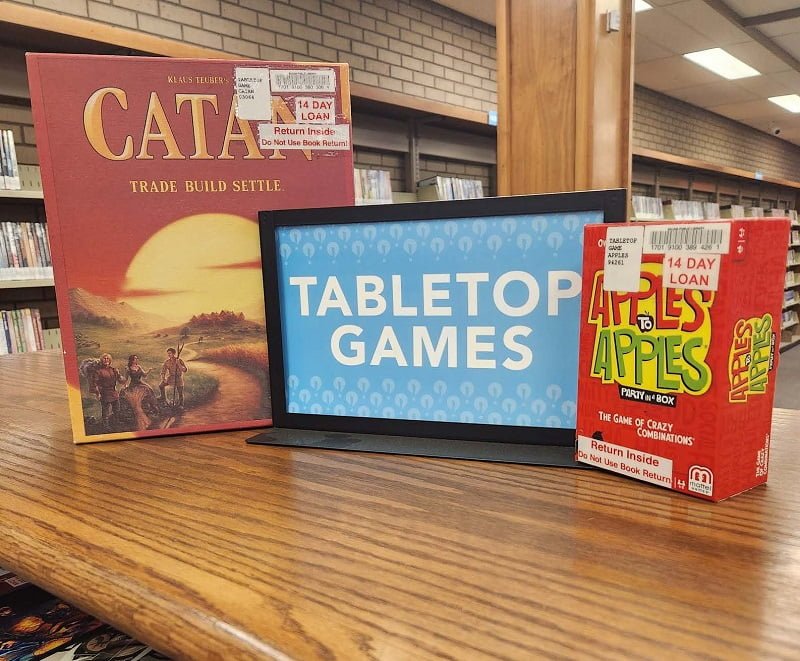 According to National Today, the website for unofficial national holidays, November 20 through 26 is National Game and Puzzle week. As you wind down your Thanksgiving day revels, you might decide to spend your post-feast downtime celebrating this holiday as well. The neat things about this: 1) you can enjoy these activities alone or with friends and family and 2) the Salina Public Library has your back.

The Jig Is Up–The Benefits of Board Games & Puzzles

Board games and puzzles are not only enjoyable pastimes, they also provide brain stimulation and engaging interaction with topics and communication skills. Scholastic cites that board games have benefits in engaging kids while learning new topics, encouraging teamwork, and even soothing anxiety. Recent studies back this up, suggesting that students playing games can show gains in cognitive ability, motivation in learning, and improving ADHD symptoms. This makes sense. I’m a high school English Language Arts teacher, and I love engaging with my students with games. It lets them explore our content in less traditional–ahem boring–ways. Both my students and I enjoy it because it breaks the monotony of sit-and-get learning. Any time I can make a game out of it, I will make it work in my classroom.

And the benefits don’t stop with the young. Those studies also suggest that playing board games, particularly the ancient game Go, could help improve cognitive skills in aging adults. Further research is needed in this area. But hey, it couldn’t hurt, right? And you’ll have a little fun doing it.

Backstory of Backgammon and the Surprising Rise of Puzzles.

Peruse the toy aisles of any retail store, and you will see that we have a plethora of options for table top and board games from which to choose. I’m sure this comes as no surprise, but that wasn’t always the case. Though, you might be surprised at how old tabletop games really are.

The oldest board game that we know of is Senet, played by the Ancient Egyptians circa 3000 BCE. You read that right. Five thousand years ago, people were playing board games to entertain themselves and, in the case of Senet, earn protection from the gods. Not too long after the Egyptians were playing Senet, the Mesopotamians were playing The Royal Game of Ur, a game of “chance and skill,” as Board Games Land explains. This was the precursor to the game Backgammon that we know today. Soon, the Romans were using six-sided dice made of marble, ivory, or glass.

Fast forward to 200 AD and you would find children of India playing Snakes & Ladders, better known to us as Chutes & Ladders. And yes, the rules are pretty much the same even centuries later. The silk road and other global trade opportunities apparently influenced more than economy and religion. Soon various games were spreading and morphing into many of the games we recognize and still play today: chess and dominos, checkers then pachisi (Parcheesi), and Go and Mahjong all developed in a relatively short period of time. Finally in 1903, the US had its turn when The Landlord’s Game–the first version of Monopoly®–appeared on the scene. And the rest, as they say, is history.

Puzzles, on the other hand, have a much more eclectic history. While brain teasers and labyrinth mazes have a history of mythic proportions (literally and figuratively speaking), jigsaw puzzles weren’t seen until the 1760s. This is when John Spilsbury, “a London cartographer and engraver,” is credited with creating the first jigsaw puzzle by gluing a map to a piece of wood and cutting the board up along the lines of the country’s borders. On a side note, I must clarify that no, Spilsbury did not use a jigsaw, as that type of saw had yet to be invented. Up until the 1930s, jigsaw puzzles were still produced using wood. That meant that “puzzles had to be cut one piece at a time,” which subsequently meant that, “they were expensive,” as The Puzzle Warehouse points out. Typically, “A 500-piece puzzle typically cost $5 in 1908, far beyond the means of the average worker who earned only $50 per month.” So it wasn’t until after the invention of die-cut cardboard puzzles in the 1930s, that these puzzles started gaining in popularity and eventually being mass produced.

If you’d like to learn more about board games and puzzles, you can check out any of these resources:

Learning Is Only Half the Fun

And that’s not all! If the game and puzzle bug has bitten you, we’ve got you covered. Check out one of the 40 board games we have available. You’ll see popular games like Scrabble, Catan, and Trivial Pursuit: the Lord of the Rings edition along with the less well known, but still fun to play, games like Azul, Ticket to Ride, and Pandemic. Your library has games for all ages, making your next game night with family or friends any easy pick. In a few months, when spring and summer bring warmer weather, you can check out some of the outdoor games available: Horseshoes, Disc Golf Set, or Cornhole. 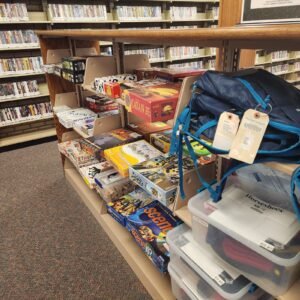 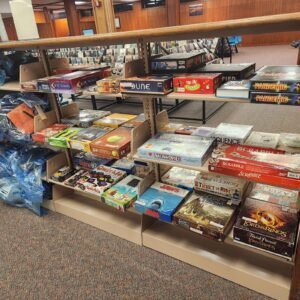 You can also pass the time with a good puzzle from our Puzzle Exchange. This is a community service we have offered since 2021 and the rules are simple: Take what looks interesting and leave what you no longer want. No check out is required. This particular service isn’t curated, so it’s all a first come, first served basis. But the puzzles there offer hours of leisurely entertainment to be sure. 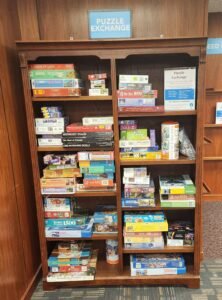 So whether you’re competitive or contemplative, you can find something at your Salina Public Library to suit your needs.