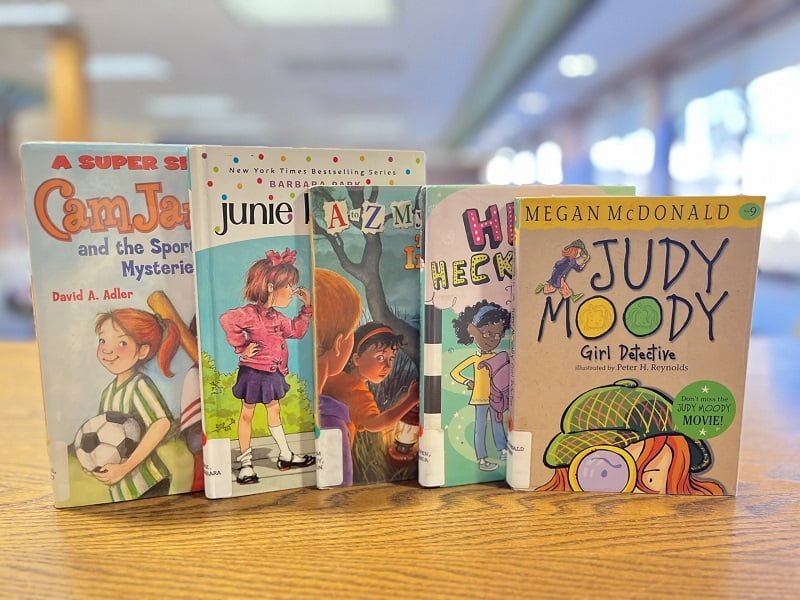 And they’re off! There comes a time when your kiddo is past the early readers’ stage and ready for their next reading step. Here is a list of some entertaining early chapter books for their expanding skills.

Cam Jansen by David A Alder

A fifth-grader helps solve mysteries with her amazing photographic memory.

A to Z Mysteries by Ron Roy

Dink loves to read, Josh loves to explore and Ruth Rose always wants to know what happened, why it happened, who it happened to, and when and where it took place! These best of friends with their sense of adventure and curiosity always seem to find themselves involved in solving a mystery!

Heidi Heckelbeck seems like any other eight-year-old, but she has a secret: She’s a witch in disguise. Careful to keep her powers hidden (but excited to use them all the same), Heidi’s learning to live like any other kid–who just happens to be a witch.

My Weird School by Dan Gutman

On the first day of class, A.J. tells Miss Daisy he loves football and video games but hates school. Then Miss Daisy tells him she hates school, too, and the students think their teacher just might be an impostor. “Reluctant students will have no trouble relating to A.J., and breezy Miss Daisy illustrates how respecting kids and balancing learning with fun can produce positive results.

Third grader Judy Moody is in her first day of school bad mood until she gets an assignment to create a collage all about herself and begins creating her masterpiece, the Me collage.

You can also check out her brother, Stink.

Save the planet . . . Pluto! Stink Moody, wise-cracking champion of everything small, is on a new mission: to reinstate his favorite celestial orb. (Ages 5-8) Look! Up in the sky! Is it a falling leaf? A speck of dust? A speeding mosquito? No, it’s Stink Moody, Solar System Superhero! When Stink learns that Pluto has flunked out of the Milky Way for being too shrimpy, he feels like he might just explode with a Big Bang. Stink has no choice but to take a stand for the sake of little planets (and little people) everywhere.

Junie B Jones by Barbara Park

It’s Junie B.’s first day and she doesn’t know anything. She’s so scared of the school bus and the meanies on it that when it’s time to go home, she doesn’t.

The Adventures of Allie and Amy by Stephanie Calmenson

Best, best, best friends Amy and Allie do absolutely everything together. And this summer they have made a list of activities that they will do each and every day. But then Allie learns she’s being sent to a sleep-away camp and all their plans are ruined! How will these BFFs ever make it through the summer?

The Princess in Black by Shannon Hale

Eight-year-old Jack and his younger sister Annie find a magic treehouse, which whisks them back to an ancient time zone where they see live dinosaurs.